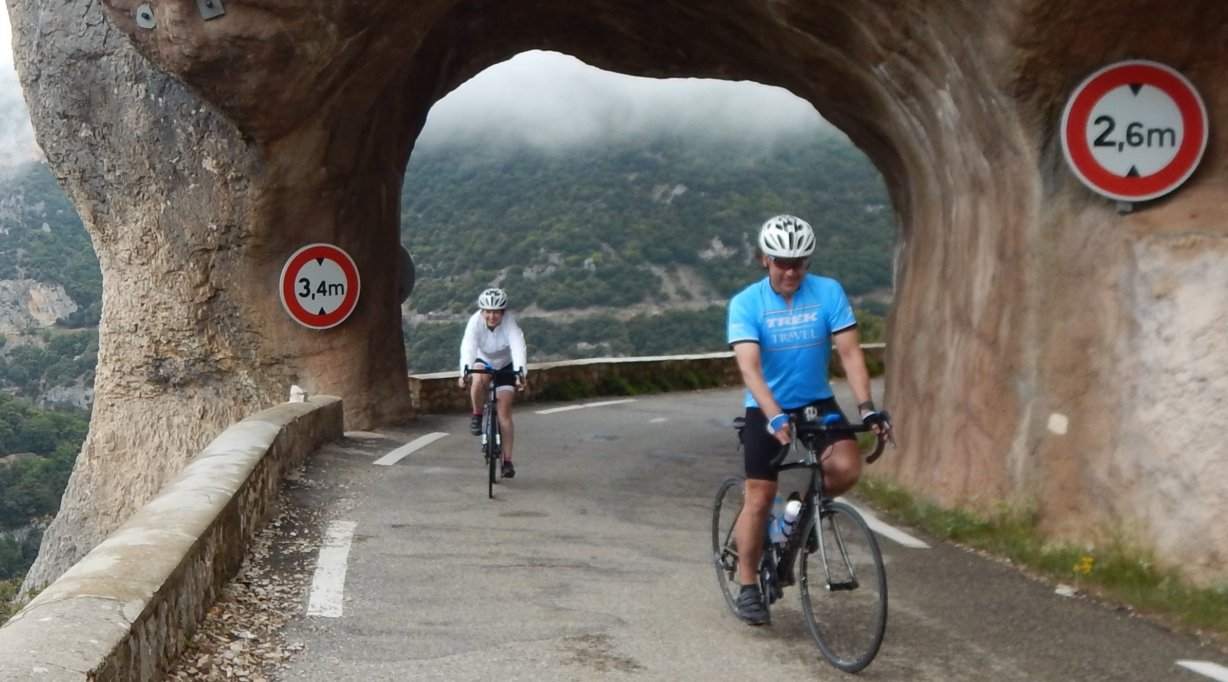 Lynne and Dan Mapes-Riordan didn’t start riding together until just a few years ago, when they bought their first new road bikes. Dan has been riding consistently all his life, whereas Lynne describes herself as a later-in-life biking enthusiast. They now ride together all year, taking indoor cycling classes with Training Hub in the winter and doing supported touring with Trek Travel in the summer.

How did you first get into riding bikes?

Dan: I grew up in suburbia, where if you wanted to get to a friend’s house, you just hopped on your bike and ran. As a kid, I’d spend all day riding bikes; we did everything you could with a bike. I started doing short touring rides in the early 90s; in general I think it was just as a form of exercise.

Lynne: Dan and I grew up together, in the same suburb. But when you talk about riding, I think of it now not so much as what all of us did as kids, but the road cycling that we’ve been doing recently. How I got into that was an effort to spend more time with my husband, who liked to tour, and I tried it and fell in love with it.

Dan: Fast forward to today, we really enjoy riding bikes, and going on day trips where we can see the countryside. We think it’s a really nice way to travel, in the sense that you’re more intimate with your surroundings when you’re riding a bike, compared to driving around, and you can go a lot further than you could if you were just walking around. So, you get to see it more. Plus, after your day’s worth of ride, you burn so many calories, you can eat whatever you want. I like that aspect of it as well.

How often do you ride, either separately or together?

Lynne: Last summer, I started riding on my own, which is something I hadn’t been doing before. I would ride my own short little early morning rides 2-3 times a week, and then on the weekends, Dan and I would tend to do those somewhat longer rides. If we had nothing on the agenda for the day, we would entertain the idea of doing a 50 or 70-mile ride, like we went up to Illinois State Beach one day where we had the whole day to do whatever we wanted.

Lynne: Dan pointed it out to me, as I was trying to continue with cycling during the winter, doing some spin classes here and there, and I’m like, “On my own bike? That’s amazing!” So I started it the first fall you offered it, and have just loved it. What I really like about it is the soft sense of community that has developed over the time there at Training Hub. I think we encourage each other nicely. And I think that all of you have done a really great job of buying trainers that seem to work for all of us; you get technology that makes sense for Chicagoans that are trying to keep up with their cycling legs in the wintertime.

How has Training Hub affected the way you ride throughout the year?

Lynne: For me, I don’t spend a month out there just trying to get back to where I was. I can start riding in the spring as soon as it’s nice enough for fair-weather outdoor cyclists, and I’m just ready to go. It’s fantastic. It made a huge difference.
Dan: Yeah, I’d say the same for me. You don’t have to build up to it again. You know what, to be honest with you, the main thing that applies to me is the seat; I don’t have to get re-used to sitting on a bike seat. Fellow bikers will know exactly what I’m talking about. [laughs]

Anything else that you think folks who are interested should know about Training Hub?

Dan: Everyone’s going at their own pace, so it isn’t like you’re competing against each other; it’s just more like your class is you competing against yourself. You could be a pro cycler, be a beginner, and it’s all scaled to your ability.

What inspired you folks to first look into Trek Travel?

Lynne: Well, the Trek Travel brochure came in the mail, and I looked through it, and I said to Dan, “Wow, that looks like fun.”

Dan: There was a time in the past where I was aware that people did longer tours, but we were raising a family, and paying for kids’ college tuition; we weren’t really in the mode of being able to spend a lot of time or money away doing such a ride. But once we became empty-nesters, and the kids were out of college, it was like, “Wow, we’ve got all the time in the world, and now we don’t have to pay tuition payments; I guess we can do these trips.” [laughs]

Do you have any sort of stand-out memories from any of the trips you’ve done?

Dan: We’ve done three: Southern France, Southern Spain, and Tuscany. The first one, from France, was going up Mount Ventoux. I kind of knew the concept of it, but until I actually did it--now I know what it is.

Lynne: It’s all been so fantastic. My memory really is the care that we received from the Trek Travel guides. I’m usually the weakest rider on the tour; I’m always permitted to do what I can and how I can, and we’re just taken care of so well by them. I’ve done a lot of traveling, and I’ve done a lot of tours, so I’ve had the experience of lots of guides. I don’t know where you find them, but they’re tremendous.
Dan: Yeah, they’ve got the right balance: they don’t pamper you, but at the same time, they’re always there to help you if you want help, they’re energetic, and they want to make sure everyone is enjoying themselves. But Lynne’s right, there’s not as many specific memories, as much as the whole trip. The other cyclists are nice, the food’s good; it’s been worthwhile trips every time.
Lynne: Yeah, and I think another way to look at it is, there hasn’t been a single disappointment, right? Lots of times, when you go on a trip, you’ll have a disappointment, and I just haven’t had any disappointments!
Dan: We would highly recommend to anyone that they do it. We really enjoyed it.
Lynne: Yeah, and we’re riding our fourth in four years. We’re going to Norway!