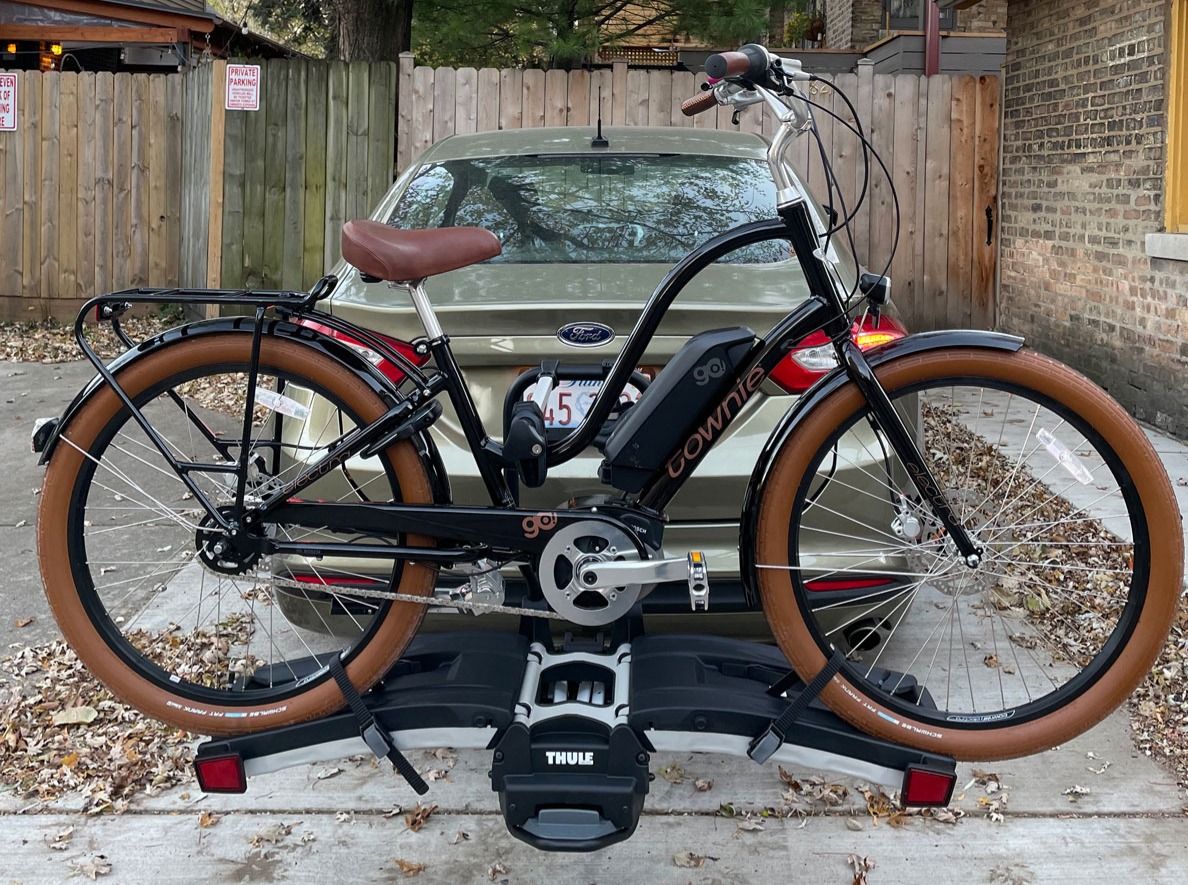 Meet Liette Brisebois of Evanston, Illinois. The retired French teacher has been an avid cyclist since the days in her native Montreal. She rode her bike to work at New Trier High School and hit trails in Illinois and Wisconsin with her late husband, William Kinsella. Today, she’s still hitting the trails, beating it around town running errands on two wheels. Only now she’s battery propelled on her new Townie Go electric bike.

Liette, like other urban cyclists of the Baby Boomer generation, came to the realization last summer that a manual bike no longer provided the same enjoyment. We spoke with Liette recently about her decision to switch and how her ebike suits her active lifestyle.

Is it fair to say you’ll ride a bike anywhere?

“I’m a way of life cyclist. It’s just what I do. I was lucky to work at New Trier High School in Winnetka. So, when I turned 40, my late husband and I bought bikes, and I started bicycling to work. It took 10 minutes more to bike, which was better than being stuck in traffic. I was fully equipped with saddle bags. I carried all my stuff in there.”

You mentioned your route took you along the Lake Michigan shoreline in the morning. Did you ride in the winter, too?

“Yes. I wore the same clothes to bike in that I ski in. But I don’t bike in the snow.”

So, what made you transition to an e-bike last summer?

“When I was in Seattle in a bicycling area with a lot of trails, it was so hilly that I ended up renting an ebike. I’ve been blessed to be able to travel to France every year and to Montreal. I saw a lot of ebikes in France. I have best friends in Europe who were maniacs about their ebikes and convinced me that’s what I needed.”

How does the ebike experience differ from a manual bike?

“Biking into the wind on the lakefront, it can be demanding. And then you have to focus and wonder, ‘Am I going to make it? Am I going to be OK?’ It didn’t feel like that much fun anymore. On my ebike, I don’t worry. It’s always fun to ride no matter the wind or the hills.” 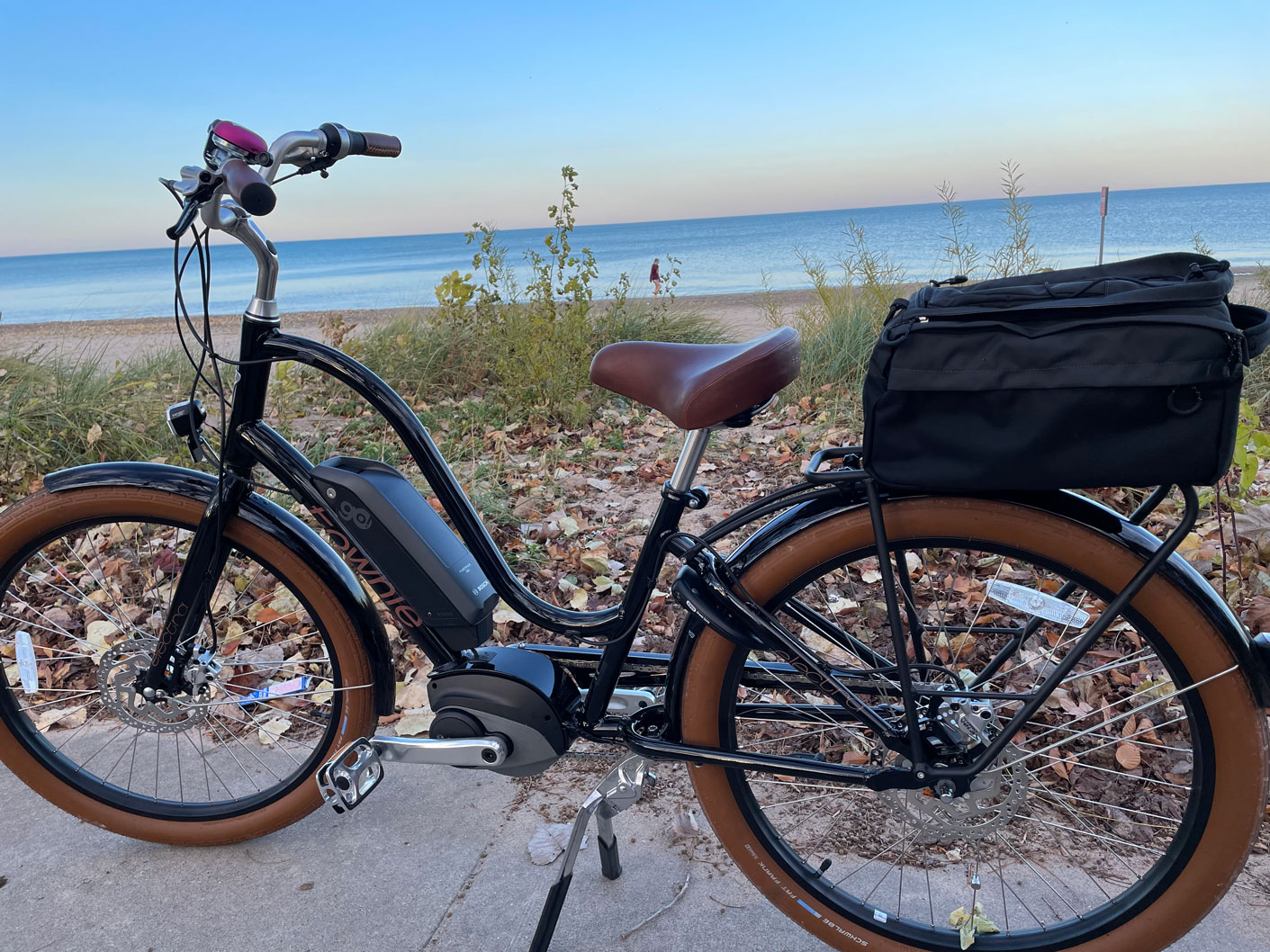 Do you ride with a group of other ebikers?

“My best friends also have ebikes. I am retired now, and I can go on long bike rides. I am a lone biker. I’m a widow, so I’m adjusting to this life. I bike alone. I ice skate alone. These are not activities that you need a partner. It’s nice. I went to Wisconsin and did Glacial Drumlin Bike Trail by myself. Somebody always knows where I am.”

Ebikes are much heavier than standard bikes. How do you deal with the weight when you have to move it around?

“That’s true. Mine is at least 50 pounds. But I have the bike that you just roll up on the rack. I have to have the right rack.”

Liette: “I take it in for regular maintenance twice a year. I’ve had issues with the battery, but they’ve been very supportive at Wheel and Sprocket. They got me another battery.”

After years of being a cool urban biker, do you worry the ebike will steal some of your urban biker swag?

“I don’t because it’s a way of life. I bike because I enjoy it, so why make life miserable? Before the pandemic, I would go to downtown Chicago regularly to the Art Institute and Millennium Park. I have my hairdresser downtown. It’s about the same amount of time to drive by the time I find parking. Riding a bike adds 15 minutes.”